Protein is the most abundant substance in the body after water. It is found in every cell throughout the body and is a major structural component of cells, especially muscles. It is also found in the body’s internal organs, hair and skin. Because it is such an abundant nutrient, it’s not hard to see why protein is so important for the body.

Proteins are polymer chains made of amino acids that are linked by peptide bonds. Unless you are a chemist, this probably doesn’t mean much to you. And that’s just fine. For anyone interested in protein as a nutrient, the important thing to understand is that proteins are made up of amino acids – more than twenty of them. Eight of these amino acids are classified as essential, meaning the body is not capable of manufacturing them; therefore, they must be supplied by the diet.

Most humans consume these amino acids in protein-rich foods. These include meats such as beef, venison, chicken and fish. Animals are unable to synthesize amino acids, so they obtain them from plants. As they accumulate in the animal’s body – particularly in muscle tissue – that animal then becomes a source of protein. The protein-rich meat we eat is muscle tissue. The same proteins and amino acids found in meat can be found in plant sources such as whole grains, pulses, legumes, soy, nuts and seeds. However, it is important for vegetarians and vegans to consume a wide range of these foods in order to get enough of all the essential amino acids the body needs.

During the digestion process proteins are converted into smaller units called peptides and then into their base units, which are the amino acids. This breaking-down process typically involves exposure to digestive acids and chemical reactions caused by enzymes called proteases throughout the digestive tract. A few of the amino acids the body receives from protein may be converted to glucose for short-term energy (substantially more are converted if the body is in starvation conditions or on carbohydrate-free diet), but the vast majority are used for replacement of the protein component of muscles, enzymes and hormones. We often refer to these as “building blocks” rather than “fuel.” The body tends to use sugars and starches much more readily for fuel.

The versatility of protein was demonstrated in a famous study conducted in 1930 by two Arctic explorers who had been impressed by the Inuit people’s ability to live all winter on nothing but caribou meat and marine mammal fat (both high in omega-3 fatty acids) while performing strenuous work in the Arctic environment. These two men, Stefansson and Anderson, came back from their expedition and volunteered to be studied by researchers at a hospital in New York City.

The two men lived in the hospital for a year and ate an all-meat diet consisting of 75 percent fat and more than 2,500 calories a day. At the end of a year, both had lost about six pounds of weight. Even more astonishing was that their cholesterol levels and other blood chemistry values were normal, and neither experienced any adverse effects. They did not develop scurvy from the lack of vitamin C either. Because almost all mammals other than humans are able to synthesize vitamin C, their diet provided this critical nutrient we tend to associate mainly with citrus fruits.

While this groundbreaking study does show how important protein is for the body, one should not immediately adopt an all-meat diet –remember that the most widely available meats today are produced on factory farms from animals fed grain-based diets and allowed very little physical activity – a far cry from wild caribou and marine mammals. There were plenty of nutrients that Stefansson and Anderson were not able to ingest on their diet, and their bodies would eventually suffer from the inadequacy. A diet rich in fresh fruits and vegetables along with sources of lean protein is still far superior. The source of protein is also an important factor.

For years doctors and nutritionists have been telling people to avoid fatty meat and dairy products, all of which happen to be high in protein. Consequently, protein has become an unexpected casualty of the war on fat. A low-fat diet is certainly a healthy one, but you must be careful not to eliminate protein. Many people thrive on plant based proteins, but there may be people who are genetically “wired” to do better with some animal protein in their diets – people can have widely varying nutritional requirements, depending on their ancestry, their environments, their age and health status, and the kind of work they are doing.

There’s another reason you don’t want to cut down on your protein intake – it helps you feel fuller for longer. Anyone trying to maintain a healthy weight can appreciate help in avoiding midday snacks. A study in which a group of volunteers who doubled their protein intake to 30 percent of their daily caloric intake, and reduced fat intake to 20 percent of caloric intake, found it easier to lose weight. On average, the people in the group were eleven pounds lighter in just three months. When protein is digested it causes the body to release specific chemicals that tell the brain that you feel full. This goes beyond simply filling your stomach up and can be a great aid in portion control.

It’s good news for dieters that avoiding hunger can be as easy as serving up a little extra protein. A high protein diet actually has a twofold effect on weight loss: It curbs hunger and provides muscles with critical amino acids, as we learned earlier. Increasing dietary protein intake after physical activity has been proven many times over to help speed muscle growth. And because muscle burns fat and calories, the more muscle mass you have, the more calories you can burn. That not only makes workouts more effective but also helps increase your calorie burn in every activity you engage in throughout the day. Not to mention that a higher lean body mass helps you look and feel good too.

For more information on your Diet/exercise/supplement plan or Yoga and Retreats in Mallorca please get in touch with us here.

Original Article from ‘the art of growing young’ by 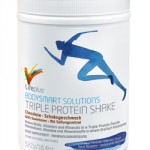 Bodysmart Solutions Triple Protein Shake is a great addition to your daily diet. Each serving provides high quality protein from three different sources – whey, milk and soy – providing the full spectrum of amino acids and in a readily usable form.
This tasty shake is an ideal support for both weight loss and performance. This formula supplies protein as an energy source – with virtually zero fat and only 1 g of carbohydrates. For those who are looking to perform to their best in sports or other exercise, protein is a vital element in supporting muscle growth and maintenance.
The Bodysmart Solutions Triple Protein Shakes also contain highly bioavailable Magnesium, which supports your body in synthesising protein, as well as Calcium and Potassium, which help to maintain bones and teeth, muscular function and blood pressure.
A low fat, protein rich and tasty drink for those who want to be Bodysmart!