You are here: Home » News » NUTRITION: Beat the Belly Bloat

After over 20 years of being concerned about my stomach, and its ability to swell up at the merest morsel of food, I think I discovered this week the answer to beating the belly bloat!!!

Whilst googling bloating I came across something very new to me – a group of foods that are classed as FODMAP. Now, after trying every tablet, sachet and diet (including Atkins, Dukan, Flat Belly, No Carbs, Candida Control, Detox, etc, etc) ever recommended, 3 days eating low FODMAP Foods and avoiding high FODMAP foods and I’m already seeing and feeling the difference.

Discovered in Australia and originally recommended as a novel approach for the treatment of Irritable Bowel Syndrome, it has now been heralded as a prevention of bloating and gas, as well as treating other digestive ailments. FODMAPs describes a collection of short-chain carbohydrates found in many common foods. FODMAPs stands for Fermentable Oligo-, Di- and Mono-saccharides, and Polyols.

The FODMAP theory holds that consuming foods high in FODMAPs results in increased volume of liquid and gas in the small and large intestine, resulting in distension and symptoms such as abdominal pain and gas and bloating. The theory proposes that following a low FODMAP diet should result in a decrease in digestive symptoms. The theory further holds that there is a cumulative effect of these foods on symptoms. In other words, eating foods with varying FODMAP values at the same time will add up, resulting in symptoms that you might not experience if you ate the food in isolation.

FODMAPs are basically carbohydrates (sugars) that are found in foods. Not all carbohydrates are considered FODMAPs. The FODMAPs found in the diet are:

FODMAPs are osmotic (means they pull water into the intestinal tract), may not be digested or absorbed well and could be fermented upon by bacteria in the intestinal tract when eaten in excess. Symptoms of gas, bloating, cramping and/or diarrhoea may occur in those who could be sensitive to the effects of FODMAPs. A low FODMAP diet may help reduce symptoms, which will limit foods high in fructose, lactose, fructans, galactans and polyols. As mentioned before, the low FODMAP diet is often used in those with irritable bowel syndrome (IBS), however the diet also has potential use in those with similar symptoms arising from other digestive disorders such as inflammatory bowel disease. 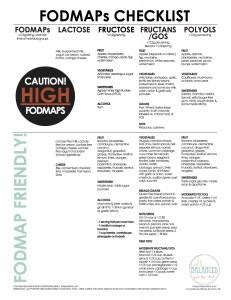 Tips for a low FODMAP diet:

Follow the diet for 6 weeks. After this, add high FODMAP foods one at a time back into the diet in small amounts to identify foods that could be “triggers” to your symptoms. Limit foods that trigger your symptoms.

Read food labels. Avoid foods made with high FODMAPs such as high FODMAP fruits, HFCS, honey, inulin, wheat, soy, etc. However, a food could be an overall low FODMAP food if a high FODMAP food listed as the last ingredient.

Limit serving sizes for low FODMAP fruits/vegetables and high fiber/low FODMAP foods such as quinoa to a ½ cup per meal (½ cup=size of a tennis ball) if you have symptoms after eating these foods. The symptoms could be related to eating large amounts of low FODMAPs or fibre all at once.

For nutritional help or more information on your FODMAP EATING PLAN or Yoga  and Retreats in Mallorca please get in touch with us here.